“Rabbit Hole is a great story and its bourbon tastes like a happy ending.”

Great bourbon starts with a story that is as much about the process as it is about the distillery. Rabbit Hole has a good story and they are right to highlight it. It also helps that Rabbit Hole crafts good bourbon, because you can’t drink a story.

Founder Kaveh Zamanian’s love story with a lady Kentuckian and that Blue Grass state elixir reminds me of my own early romance with my partner as we roadtripped the Bourbon Trail. Zamanian’s slide down the “rabbit hole” resulted in a smoothly crafted bourbon and rye that belie his Iranian roots and prior psychoanalyst career. Sampling Rabbit Hole not only took me back to Kentucky, but was reminiscent of my introduction to bourbon. Rabbit Hole is a most apt moniker for this distilled delight and I could think of no one more deserving to review it with than my partner Tiffany.

Taster’s Choice: For background, I enjoy LOTS of bourbon and tend to be a bit of a Kentucky purist, meaning Champagne comes from the region of the same name in France; Tequila is made in Mexico; and Bourbon best be from a Kentucky distillery. My first taste of Bourbon was Knob Creek and it remains my favorite.

Tiffany is more liberal in her tasting; its origins aren’t important as long as it is well-aged and well-crafted. Her choice is Four Roses Single-Barrel. 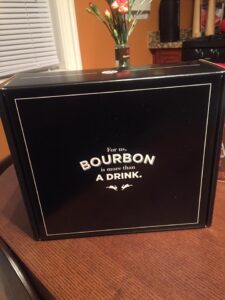 The Bourbon: Prepare yourself for 95 proof, corn-based whiskey. Firm nose and finish when sampled neat. A touch of water releases the honey malted barley for a smoother, almost candied finish. Malleable enough for Manhattans without losing its composition. I’d recommend it with a short whiskey glass and a large bourbon ice ball.

The Rye: To be fair, I detest Rye but Tiffany is a fan. 95% Rye and the remainder Malted Barley, the Rabbit Hole Rye is officially the only rye at this point that I would ever consider purchasing. We both found it surprisingly smoother than the Rabbit Hole Bourbon and pretty much any other rye that we have consumed. I’d recommend it neat with a splash of water.

The Verdict: I’ve heard good bourbon stories before. Some build you up only to drop you into a descent–not a pleasant rabbit hole, rather an underwhelming disappointment only made worse by its preceding story. This is not the case for Rabbit Hole. I won’t be coy: Rabbit Hole is a great a story and its bourbon tastes like a happy ending.